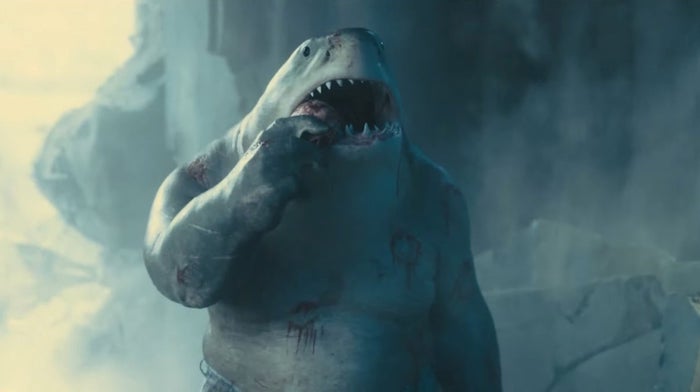 When it was announced that James Gunn would direct a new Suicide Squad movie for Warner Bros. and DC, a few things felt inevitable. There would be debates about Gunn taking over the reins of the franchise from the oft-maligned David Ayer. Some fans wondered if this signaled yet another new direction for the franchise. With a cast this stacked and an ensemble of some of DC’s weirdest and dearest side characters, it seems as though The Suicide Squad, as this new movie is so creatively titled, could bring a much-needed dose of bonkers to DC’s big screen ventures.

And then, of course, there’s King Shark.

Voiced by Sylvester Stallone and portrayed via motion-capture by Steve Agee, this movie signals the debut cinematic appearance of Nanaue, the humanoid shark with a high body count to his name and a semi-regular membership with the Squad. It should surprise literally nobody that it took about five seconds after the announcement of his appearance in The Suicide Squad for the internet to start thirsting hard after King Shark. 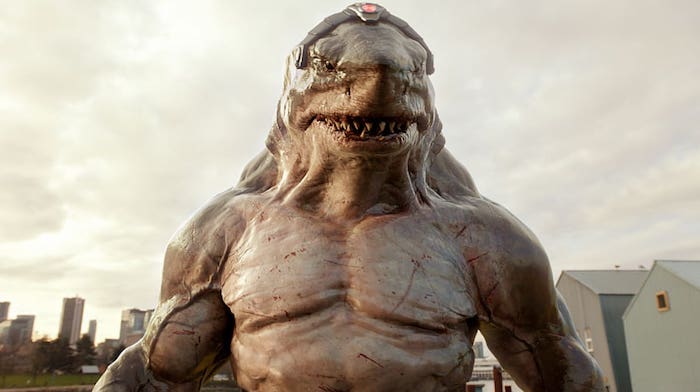 King Shark is Hot, and Everyone Knows It

As seen in the first trailer for The Suicide Squad, King Shark is halfway between a maniacal monster from the deepest recesses of the ocean and a himbo darling who literally says “nom nom” after eating a man whole. He’s got big hands and rage issues but remains oddly endearing all the same. He’s even got a dadbod thanks to Gunn (he didn’t think it made much sense for his talking man-shark in golf shorts to “have such mammalian body structure”), which only made people fancy him even more. If you were surprised that King Shark commanded such a gargantuan amount of thirst, then you must be new to the internet.

Let’s not beat around the coral reef here: King Shark has always had it going on and DC knows it. Practically every iteration of him, from comics to cartoons to TV, is depicted as having a great body, and it’s not like they can justify that sort of muscle definition by claiming it’s in some way accurate to shark biology. Moreover, he’s a great character for stories of the tragic pull between good and bad that DC is so excellent at. In the live-action Arrowverse series of The Flash, King Shark is Shay Lamden, a marine biologist from Earth-2 who was transformed into his anthropomorphic form by the S.T.A.R. Labs particle accelerator, which has left him tormented by his newly inhuman nature. He even has a romantic subplot with his marine biologist wife Tanya, who works to help him cling to his humanity, even after he makes the ultimate sacrifice to stay as King Shark when called upon to fight for the safety of Central City. It’s classic Beauty and the Beast stuff, but wetter. Ahem.

Hell, in the animated film Justice League Dark: Apokolips War, it’s revealed that King Shark is the ex-boyfriend of John Constantine, one of the DC universe’s undisputed sex gods. He’s such a magnetic sexual presence that just being back in a room with him has Constantine blushing and trying to avert his gaze. 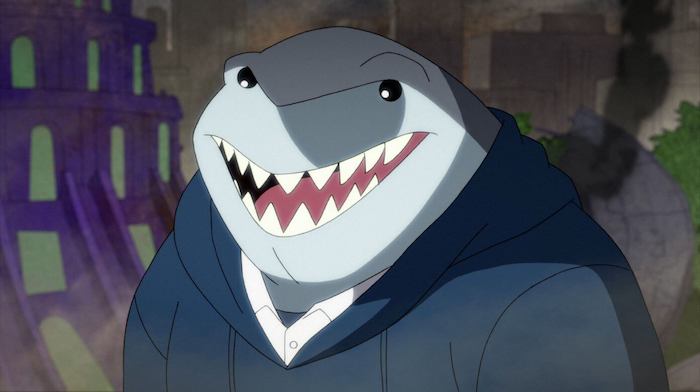 Turning to the Beasts

Of course, such monster crushes aren’t intended to be exclusively literal. The fact that King Shark is, well, a shark matters about as much as the Beast being lion-esque or every creature in a Guillermo del Toro movie being what they are. The sexualizing of the monstrous is a key way that many, especially women, have found a safe space to explore societally discouraged aspects of desire. The notion of female-focused sensuality is one that remains shockingly sneered at or outright denied by many facets of society. Consider how Cardi B and Megan Thee Stallion singing a reasonably explicit song about sex inspired a deluge of horror and clutched pearls from the usual suspects, or how romance novels are dismissed as trash by literary experts. There is still something about the idea of women openly discussing what makes them tick, even in 2021, that is deemed utterly unacceptable to the masses. It’s hardly a shock, then, that we’ve turned to the beasts. If it’s been written off as monstrous already, why not lean in hard to that aspect?

And this doesn’t even scratch the surface of the trend. By the time we get to the birth of Hollywood and Universal’s monster movies helping to birth a new era of horror, we saw a whole generation of audiences trained to view the beasts, the vampires, and the gill-men as figures of empathy and allure. Not everyone can relate to the suave perfect hero, but the tortured monster who represents a hunger for the darker side of life appeals to more people than you’d think. Of course King Shark fits into that mold perfectly, whether he’s the sweetheart version of Harley Quinn or the tempestuous husband who yearns for his humanity in The Flash. 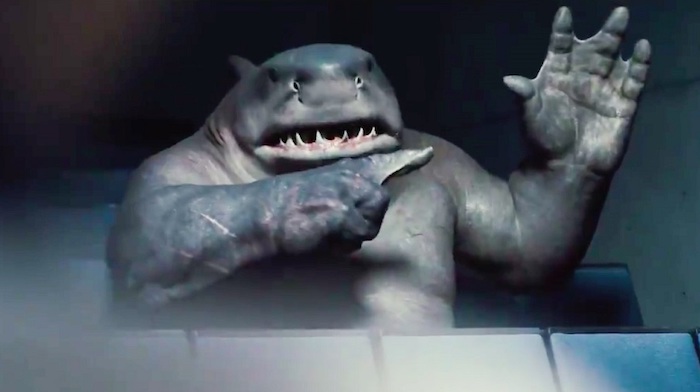 I’m Just a Girl, Standing in Front of a Shark-Man…

It’s not just about desire, however, when it comes to our friend, King Shark. His own unique physicality brings with it a much-needed sort of freshness to the over-saturated field of heroes and villains. The modern era of superhero masculinity is one defined by narrow constraints. We’re used to seeing a bunch of white guys who all look the same (and are probably all named Chris) use the same trainers, get near-identical bodies, and use them in the most trope-heavy ways. It’s not a physique that makes a lot of sense from a purely strength-based position – there’s a reason that professional strongmen, for instance, are bulky and devoid of washboard abs – but it’s one that feels aesthetically right. Deviate from that and a lot of people suddenly start complaining. Look at how some fans seemed genuinely outraged when Robert Pattinson joked about not wanting to work out to play Batman. It’s become increasingly rare to see men who are allowed to be heroes and look reasonably normal, or at the very least, free to not dehydrate themselves for days on end to achieve peak muscular definition.

That’s not the only reason it’s so exciting to see a sweetie-pie dadbod shark in shorts, but it certainly doesn’t hurt.

A big hook with The Suicide Squad is that they’re an unruly bunch of sociopaths who fire bazookas at the idea of goodness and decency. They don’t play by any sort of rules and live in a world of no-holds-barred chaos. In that context, it shouldn’t be surprising in the least that we have an adorable maniac King Shark who’s inspiring his fair share of fandom devotion. That’s probably the most wholesome part of the entire Suicide Squad! Perhaps if things go well for the movie, James Gunn will let Constantine appear for another date with his big lug of an ex. It’d probably be the most normal thing in the franchise.

The post The Inevitable “Why People Think King Shark is Hot” Thinkpiece appeared first on /Film.