Nothing makes me more sullen about the state of American self-government than stories connected to the country's epidemic of gun violence. Yes, that even holds for Tuesday's news that nine families of the victims of the 2012 Sandy Hook shooting have reached a $73 million settlement with gun manufacturer Remington Arms. That's good for those long-suffering families. But it's a triumph that likely won't be repeated.

America's attitude toward guns is unique in the liberal democratic world. Most peer countries regulate firearms far more than we do, sharply restricting the kinds of guns civilians can own and often requiring they be stored under lock and key at designated shooting ranges outside the home.

But the U.S. is different in several respects. Our federal Constitution includes a right to bear arms, and a Supreme Court majority has declared that this right applies to individuals. A sizable segment of the public feels a strong attachment to guns, viewing them as a bulwark against government tyranny and a means of self-protection against crime, which tends to be more violent in the United States, in part because American criminals (unlike those in many other countries) are often heavily armed.

Put it all together, and we have a country with high rates of gun violence and lots of spectacular mass shootings — like the one ten years ago at Sandy Hook Elementary School, in which 20 students and six educators were killed.

Normally victims of gun violence are precluded from taking civil action against firearms manufacturers because a 2005 law shields them from liability over how their products are used (no doubt because without such a law, gun companies would quickly be driven out of business). But the plaintiffs in the Sandy Hook case took advantage of a loophole in the law that permits liability "for injuries resulting from violation of state laws dealing with the marketing of their products." It so happens that a Connecticut law, the "Unfair Trade Practices Act," prohibits advertisements that encourage violent behavior — and the plaintiffs persuaded the Connecticut Supreme Court that Remington's ad campaign for the Bushmaster rifle used by the Sandy Hook shooter did precisely that. This permitted the lawsuit to go forward and the parties to reach the settlement announced Tuesday.

Unfortunately, this strategy probably won't work a second time. Gun companies have learned their lesson and will no doubt rein in their advertisements to ensure they remain protected by the 2005 law. That means firearm manufacturers will keep making their products, sales will continue to spike whenever a politician proposes to pass even modest gun restrictions, and some portion of gun buyers will persist in using their purchases to commit murder.

As Jean-Paul Sartre might have put it, there's no obvious exit from American's fatal infatuation with guns. 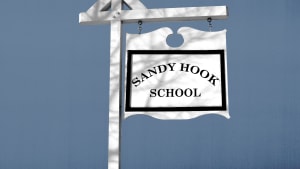