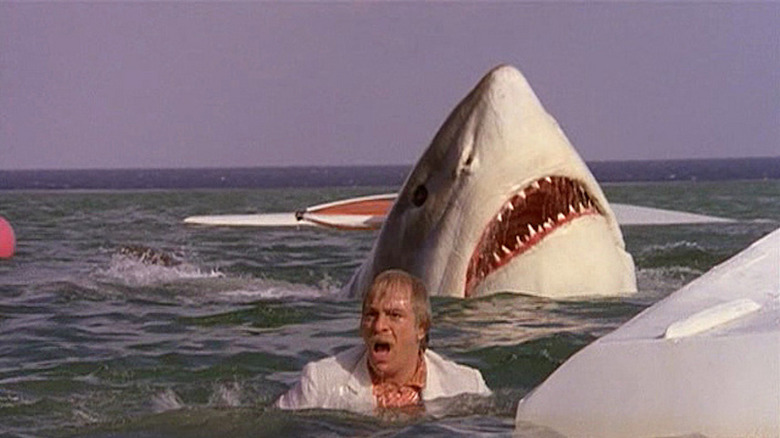 The very second Steven Spielberg's "Jaws" started breaking box office records for Universal Studios during the summer of 1975, hit-hungry rival studios and opportunistic producers scrambled into action. With that much money pouring in, they knew Universal would be prepping a sequel; they also knew an official follow-up was a good two or three years away. In the meantime, audiences would be ravenous for more tales of unusually giant beasts stalking helpless human beings, and they were in a prime position to feed that appetite. Thus, the era of the "Jaws" knock-off was upon us.

For schlockmeisters like Roger Corman and Samuel Z. Arkoff, quality and originality took a backseat to fast, cheap sensation. Hook audiences with the poster, and addle their critical faculties with an onslaught of gore and nudity. Generally, filmmakers were encouraged to follow the tried-and-true formula, but, really, all that mattered was butts in seats. And if ticket-buyers felt ripped off, so what? This was a smash-and-grab operation, and theatrical admission prices were reasonable enough that no one was going to run to the Better Business Bureau complaining about truth in advertising. It was a victimless crime. Heck, it wasn't even a crime. It was down-and-dirty entertainment.

The golden age of the "Jaws" knockoff stretched into the early 1980s, by which point lousy "Jaws" sequels had done as much, if not more, to kill the franchise as its imitators. In fact, some of the replicas were legitimately better movies than the sequels. Here are the 10 "best" films to shamelessly surf in the great white's wake. 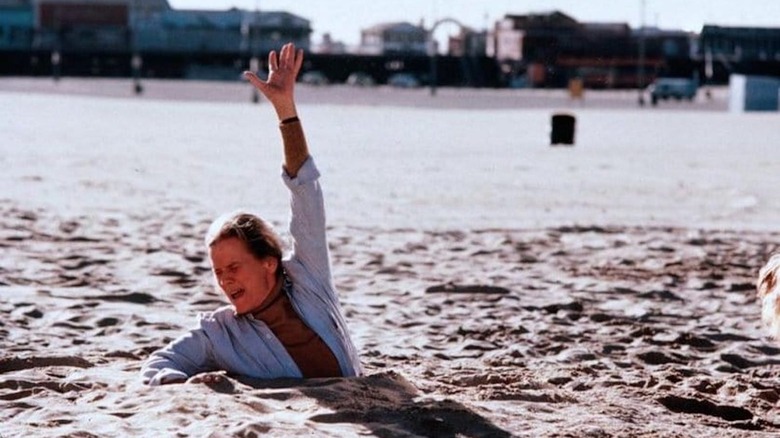 Produced by Hong Kong filmmaking legend Run Run Shaw, Jeffrey Bloom's "Blood Beach" enticed moviegoers with the tagline "Just when you thought it was safe to go back in the water -- you can't get to it!" People are disappearing on Venice Beach, and the local authorities are flummoxed as to what or who is responsible.

It's an engagingly silly premise, but Bloom's execution is sluggish when it isn't completely inept. This is a slackly told, visually murky botch job that wastes a splendid B-movie cast that includes John Saxon, Marianna Hill, and Burt Young (playing a cigar-chomping crank of a detective who's so slovenly, you can practically smell him through the screen). There's precious little gore, and the worm-like monster, when sheepishly revealed near the end of the movie, looks like it was slapped together the night before shooting. There was potential here for something fun, and, nine years later, we got it in the film that sits atop this list. 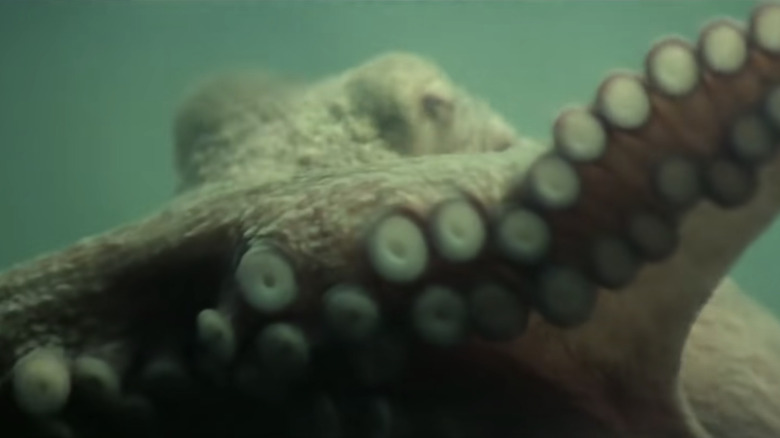 Having made the definitive "Exorcist" knock-off in 1974's "Beyond the Door," director Ovidio G. Assonitis seemed like just the man to whip up a zesty "Jaws" riff with this mutant killer octopus flick.

The film gets off to a promisingly nasty start when the octopus kills a baby (Spielberg would never!), but immediately grinds to a halt as it gets into the guts of the plot (which pins the beast's mutation on careless, environmentally ruinous construction by a local company). The picturesque locale of Oceanside, California was evidently sufficient to lure Henry Fonda, John Huston, and Shelly Winters out of L.A. for a beachfront getaway. Huston's the liveliest of the bunch, while Fonda just looks defeated (perhaps realizing he was going straight from this to the set of Irwin Allen's killer-bee epic, "The Swarm"). Marine biologist Bo Hopkins saves the day when he unleashes his killer whales on the rampaging cephalopod. 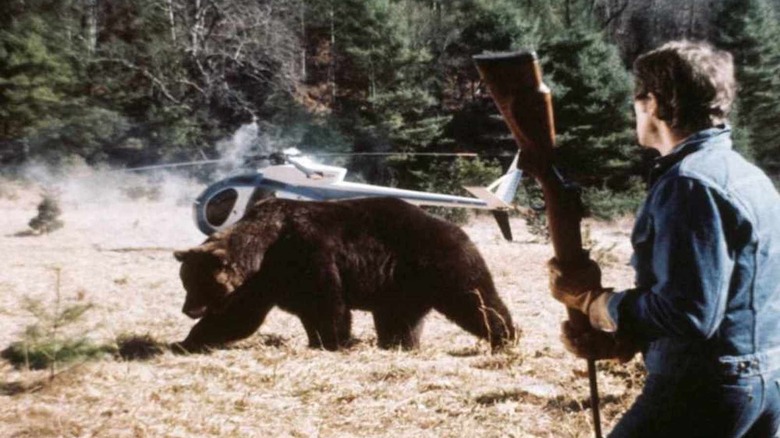 The crown jewel of Edward L. Montoro's knock-off empire, Film Ventures International, William Girdler's "Grizzly" was the first "Jaws" riff to hit U.S. theaters (on May 16, 1976), and was rewarded for its haste by becoming the one of the then highest-grossing independent productions in film history.

The plot is a blatant carbon copy of "Jaws," with Christopher George, Andrew Prine and Richard Jaeckel forced to hunt down a 15-foot-tall, prehistoric bear that's feeding on a national forest's campers. Girdler (best known for exploitation favorites "Abby" and "The Manitou") is no clod, so while the film may look a little rushed, it's never less than watchable. This was Montoro's second knock-off smash after "Beyond the Door." He would try his luck one last time with the next film on this list.

7. The Last Shark (Aka Great White) 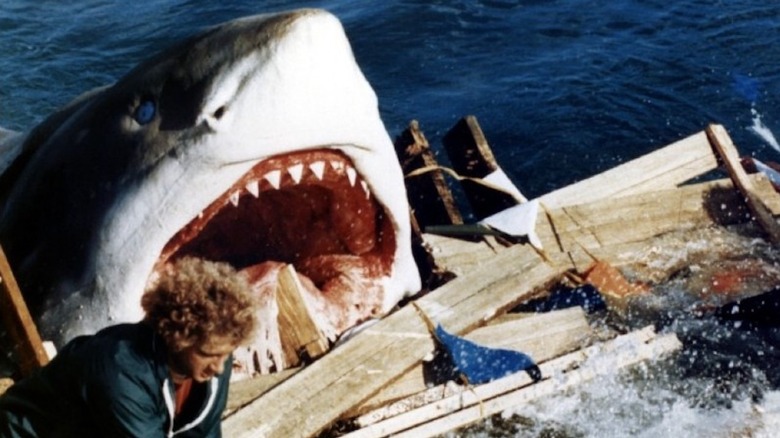 Tell me if you've heard this one before: a series of shark attacks threatens to derail a vacation-town mayor's summer season, placing him at odds with two conscience-stricken men (Vic Morrow and James Franciscus) who have no choice but to hunt and kill the beast before it gobbles up more beachgoers.

Enzo G. Castellari's "The Last Shark" could've profitably flown under the radar if FVI's Ed Montoro hadn't opted for a wide U.S. release during the spring of 1982. When the film started raking in serious coin under its new title, "Great White," Universal Pictures, worried that Castellari's movie might diminish interest in the forthcoming "Jaws 3-D," successfully filed an injunction against the production, thus making the film legally unreleasable in the United States until 2013 (a move that forced FVI into bankruptcy, and Montoro into permanent, never-seen-again exile). For years, "Great White" was the holy grail of "Jaws" knock-off fans. While it's hardly a lost classic, it's good, junky fun, peaking with a scene where the corrupt mayor tries to "drown" the shark by baiting it with a steak dangling from a helicopter. 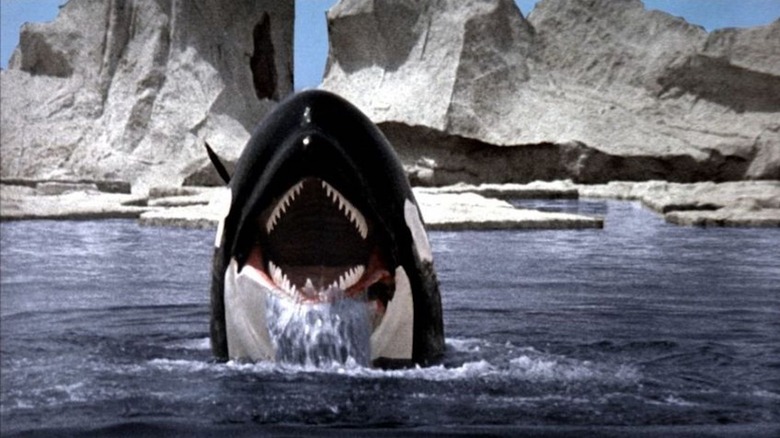 Brazen Italian producer Dino De Laurentiis threw his hat in the "Jaws" ring with this high-minded adventure about a pitiless whaler (Richard Harris) who finds himself being hunted by a vengeful killer whale after he harpoons the mammal's mate, killing both the mother and her calf. We soon learn the whaler has much in common with his newfound enemy, which plunges the film into a risible final act where the whale beckons Harris into an icy trap with its flipper.

De Laurentiis assembled a first-rate team in director Michael Anderson (Oscar-nominee for "Around the World in 80 Days") and the spaghetti Western screenwriting duo of Sergio Donati and Luciano Vincenzoni ("Once Upon a Time in the West" and "The Mercenary"), but the only collaborator who carries their weight is composer Ennio Morricone. The prolific maestro delivers a wrenchingly mournful theme that deserves a much better movie (it's shocking that Quentin Tarantino has yet to appropriate it). 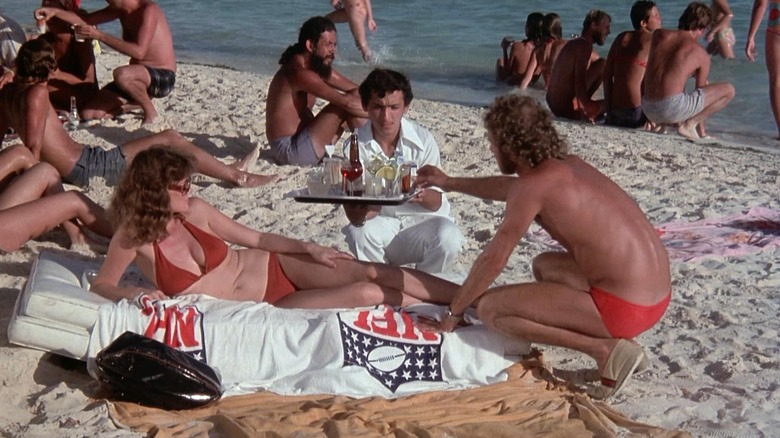 Speaking of Tarantino, the exploitation auteur is evidently a fan of this bonkers shark attack flick. Hugo Stiglitz stars as a Mexican businessman who manages to get tangled up in two love triangles with a hunky swimming instructor (Andrés García) for a luxury hotel. The first love they share in common is eaten by a tiger shark, which director René Cardona Jr. helpfully identifies for the audience via its raspy, labored, uh, breathing.

Most of the film isn't even about the shark, but rather Stiglitz and García entering an open, three-way relationship with a lovely British tourist played by Susan George. For this reason alone, "Tintorera" is essential viewing. If you're worried there might not be enough shark action, rest assured that the climactic confrontation is immensely satisfying. 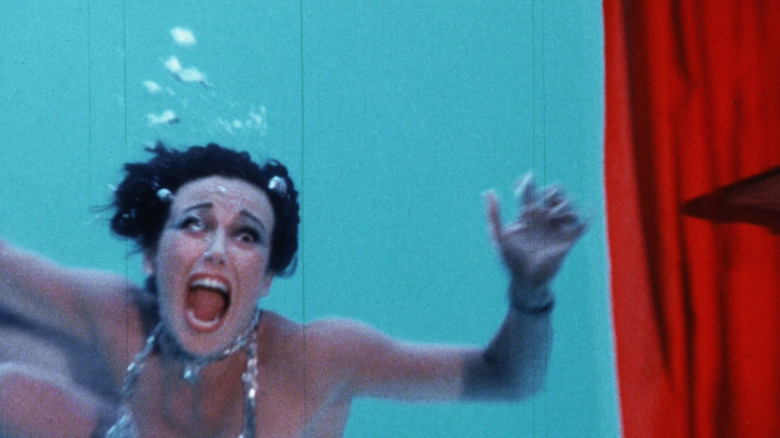 1976 was a big year for Richard Jaeckel and "Jaws" rip-offs. The "Grizzly" star leads this bizarre revenge flick as an outcast who uses his telepathic connection with sharks to dispatch those who seek to do harm to the misunderstood creatures.

It's a little bit "Willard," and a good bit of nutty fun from Florida exploitation filmmaker William Grefé. It's also a far more ecologically progressive movie than "Jaws," one that laments the demonization of the fish (several species of which would soon be hunted into near endangerment thanks in no small part to the popularity of Spielberg's film). Jaeckel is tremendously sympathetic, and the supporting cast is believably skeezy as a collection of Key West kooks. This is a criminally underrated gem. 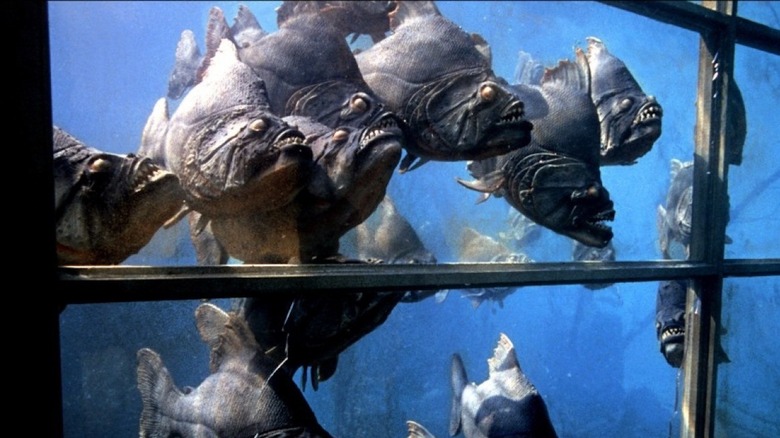 Working from a cheeky screenplay by future independent filmmaking giant John Sayles, Joe Dante launched his directorial career with this ultra-low-budget horror flick in which a genetically engineered school of piranha are released into a rural river. When the razor-toothed fish hightail it for a nearby water park, it's up to Bradford Dillman to stop them.

Briskly paced and much smarter than your average "Jaws" knock-off, Dante's film was a surprise hit for Roger Corman's New World Pictures. Though Dante and Sayles were the movie's major breakouts, "Piranha" also earned 18-year-old makeup FX wiz Rob Bottin his very first screen credit. This isn't a polished movie by any means, but the visual invention on display is consistently invigorating. "Sharks come alone, Piranhas come in thousands." 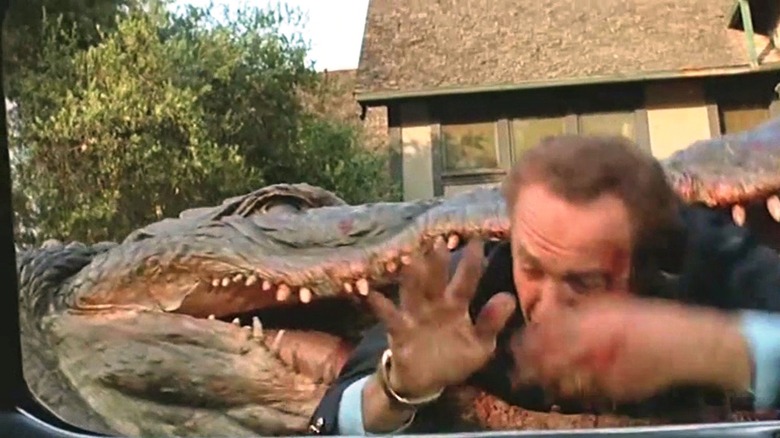 John Sayles dialed up the irreverence with the screenplay for his second "Jaws" knock-off, turning the urban legend of sewer alligators into a sly parody of cash-ins and a legitimately scary, no-nonsense horror movie in its own right. Knowing that a regular ol' alligator could never grow to the terror-inducing length of a great white, Sayles' script has our discarded reptile feast on chemically contaminated animal carcasses. This does the trick. The 36-foot long monster eventually goes topside in Chicago, and feasts on everything from a poor little kid getting bullied by his brothers to Dean Jagger. Robert Forster stars as a disgraced detective who gets to resurrect his reputation in the unlikeliest of ways. Tarantino was inspired by his performance in "Alligator" to cast him as Max Cherry in "Jackie Brown." 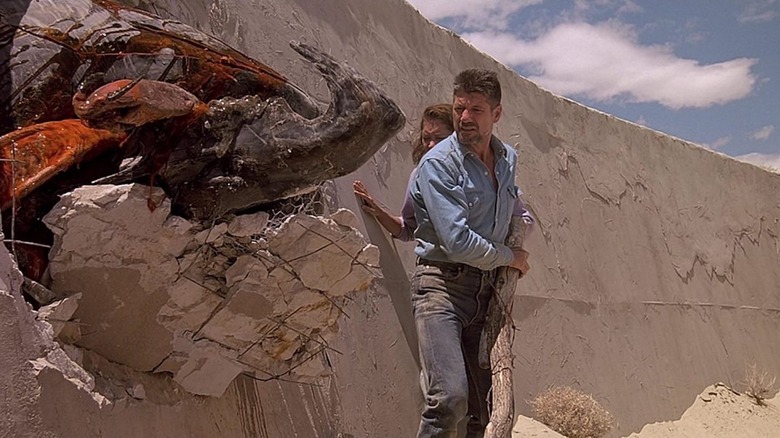 Calling 1990's "Tremors" a "Jaws" knock-off could be construed as cheating, but look at that poster! Ron Underwood's horror humdinger is using its studio's biggest, baddest monster to draw audiences into a movie about subterranean beasts that hunt humans based on surface vibration.

Considering that "Tremors" died at the box office during its initial release, perhaps it was a bad idea to play the "Jaws" card three years after "The Revenge" nailed the franchise's coffin shut. Fortunately, thanks to heavy cable rotation, the brainchild of screenwriters Brent Maddock and S.S. Wilson is now hailed as a relentlessly entertaining masterpiece that mixes laughs and shrieks with gleeful aplomb. Unfortunately, the only lesson Universal learned from the theatrical failure of "Tremors" was that films of its ilk should go straight to video/streaming.

Read this next: 14 Remakes That Are Better Than The Original