There’s seemingly no genre of video game Nintendo hasn’t touched in its multi-decade existence in the industry. Sure some have their prominence, particularly platformers, but it’s when they try something different that really gets my attention. That goes double for when a game never manages to leave Japan, becoming this unknown experience. For a company that has sold me Super Mario Bros. more times than I can remember, those rarities are few and far between.

That’s where Famicom Detective Club comes in, an adventure game series that dates itself right there in the name. Thankfully they’re unknown and untranslated no longer, or rather these shiny new Switch remakes have stood in for them. Carrying the presentation of modern visual novels while delivering classic mystery stories creates a unique contrast, one that I was able to experience as I finally took in this previously lost corner of Nintendo history.

After a brief introduction to our nameable (and silenceable) protagonist, The Girl Who Stands Behind opens with a murder. A high school student has been found dead in a river, and as a young detective’s assistant it falls on you to discover the culprit and the circumstances. Being a teenager yourself, you’re able to question both the students and staff of her school in search of the truth, both behind that tragedy and an eerie rumor that may be connected. 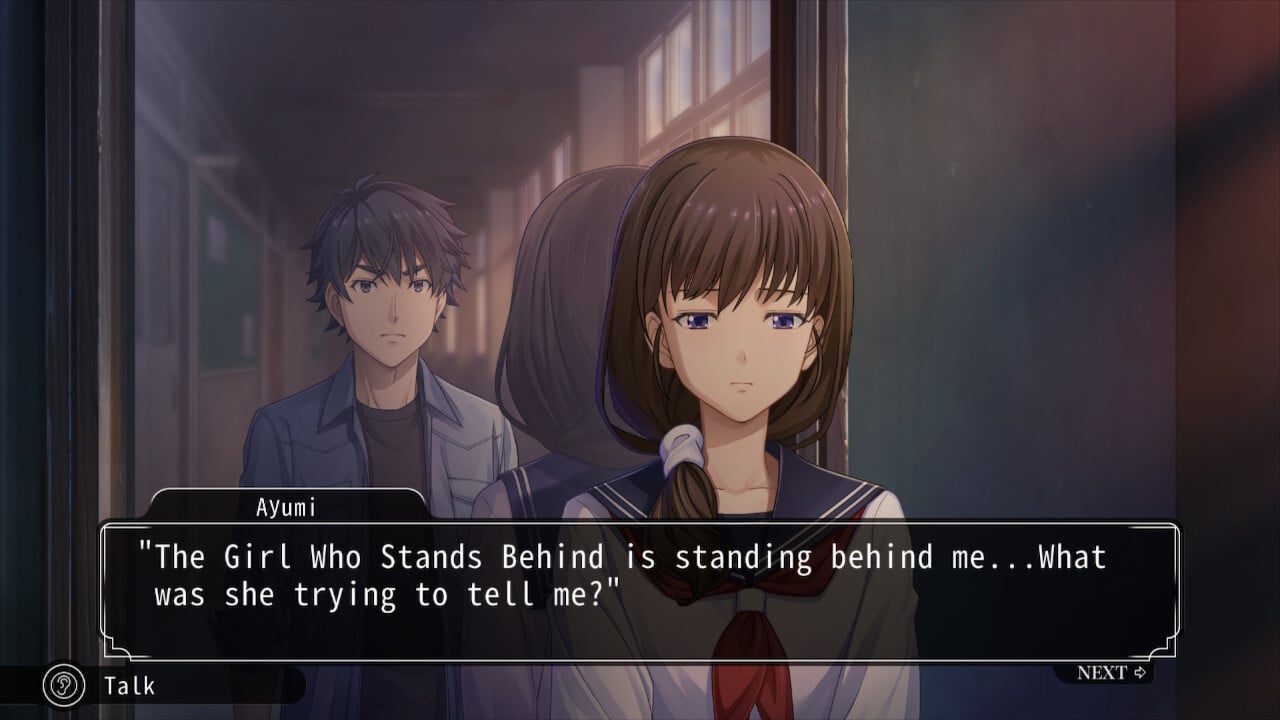 This is just the setup for what was the second Famicom Detective Club title, and I’ll be avoiding plot details in the interest of spoilers. And it is a game that can be spoiled, with its core mystery and a couple of twists to play with expectations for good measure. What I will say is that it does a good job of tying its story threads together, and working towards that convergence was my main drive in playing.

Our protagonist may not have much to him, being more of a surrogate for you the player, but it’s instead Ayumi Tachibana who gives the game its heart. As the victim’s friend, solving the case is much more personal for her and it’s through her we’re introduced to the titular school legend and other key events. It’s no wonder then that Masahiro Sakurai considered her as a Super Smash Bros. character back in the Melee days. Hopefully with this remake’s release she might gain the recognition to make some kind of greater appearance – high praise for any Nintendo character.

Mechanically is where both Famicom Detective Club games show their age most. As you make your way from interaction to interaction across different locations, all you can really do is attempt to use the given dialogue options in the proper order. It’s occasionally broken up by reflecting on the plot’s events internally, or examining your surroundings, but the bulk of the game is dialogue. 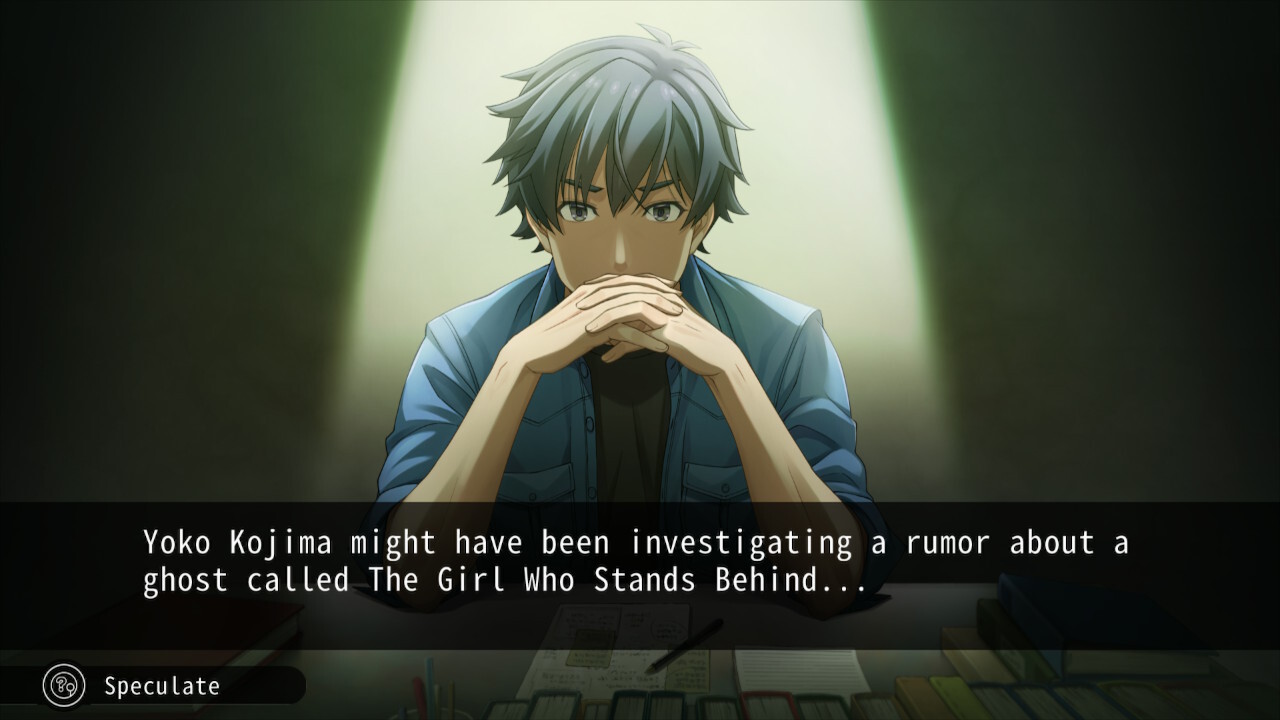 Thankfully, the game’s Japanese voice cast was a delight. Whether it was routine conversations, serious plot developments, or the occasional over-the-top character nothing felt off. This is helped by the freshly localized script, though there were a few instances of missing words in dialogue boxes. These were few and far between, but considering the type of game FamiClub is I feel it worth mentioning and hope that they can potentially be patched.

The largest complaint I have for my time with The Girl Who Stands Behind is just how frequently investigations and interviews boiled down to a “try everything” approach when it came to dialogue choices. Sometimes this works within the game’s narrative – of course it’d be tough to talk to a grieving teacher or a drunken passerby. But this issue came up frequently enough, and increasingly as the game went on, that it led to taking regular breaks rather than heightened immersion.

Sometimes you’d have to ask the same question multiple times in a row, others you’d have to leave one location and then come back to get the proper progress flag. A few of these were compounded by knowing what I needed to do, being perhaps a step or two ahead of the plot based on circumstances, but still having to talk my way through the game’s pace.

For example, one sequence involved needing to turn a TV on to catch a broadcast for an important clue. The issue wasn’t turning on the TV, but rather needing to turn on a different TV further down the dialogue progression. That’s inherently not a problem, but it meant I was checking that first TV after every other bit of dialogue I reached to no avail.

That’s a problem I’ve run into in other titles, such as the Ace Attorney and Danganronpa games, though they usually had different gameplay styles and elements to break up that conversational routine. Famicom Detective Club instead leans wholly on its story, and even if it’s an old one and has its share of cliches it still manages to be both interesting and suspenseful. I genuinely thought I had the plot figured out by a certain point, and yet it managed to throw surprises my way, and kept the tension of its murder mystery until the credits rolled.

In light of new evidence

The Girl Who Stands Behind (and The Missing Heir) make the most of their remake status by featuring pleasing visuals and character designs throughout. Characters have some animation to them, be it in their expressions or in more subtle movements. Locations, even the mundanity of a classroom or residence, are visually appealing. 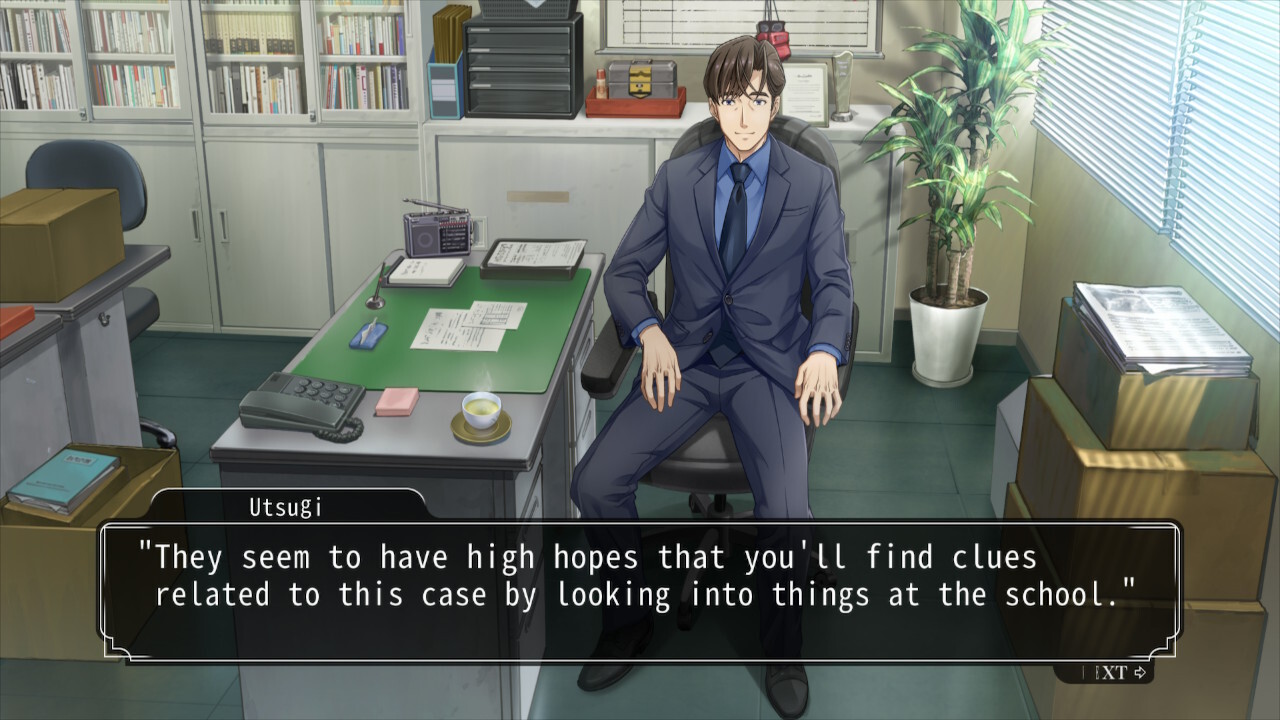 The redone soundtrack flits between recurring themes based on circumstances and mood, and makes good background noise to your investigation. If you’re feeling retro, you can even change over to the original 8-bit Famicom soundtrack as well as the 16- bit Super Famicom treatment its previous Satellaview remake received.

A good portion of your time is spent in and around the victim’s high school so it can be a bit repetitive the upteenth time you’ve visited the faculty lounge or other standbys. Still, it works as a backdrop to the spooky, student-spread rumor that gives the game its title. If anything the constant presence at the school made uncovering the truth that much more impactful, even if the only real meaningful bond you make along the way is with Ayumi. 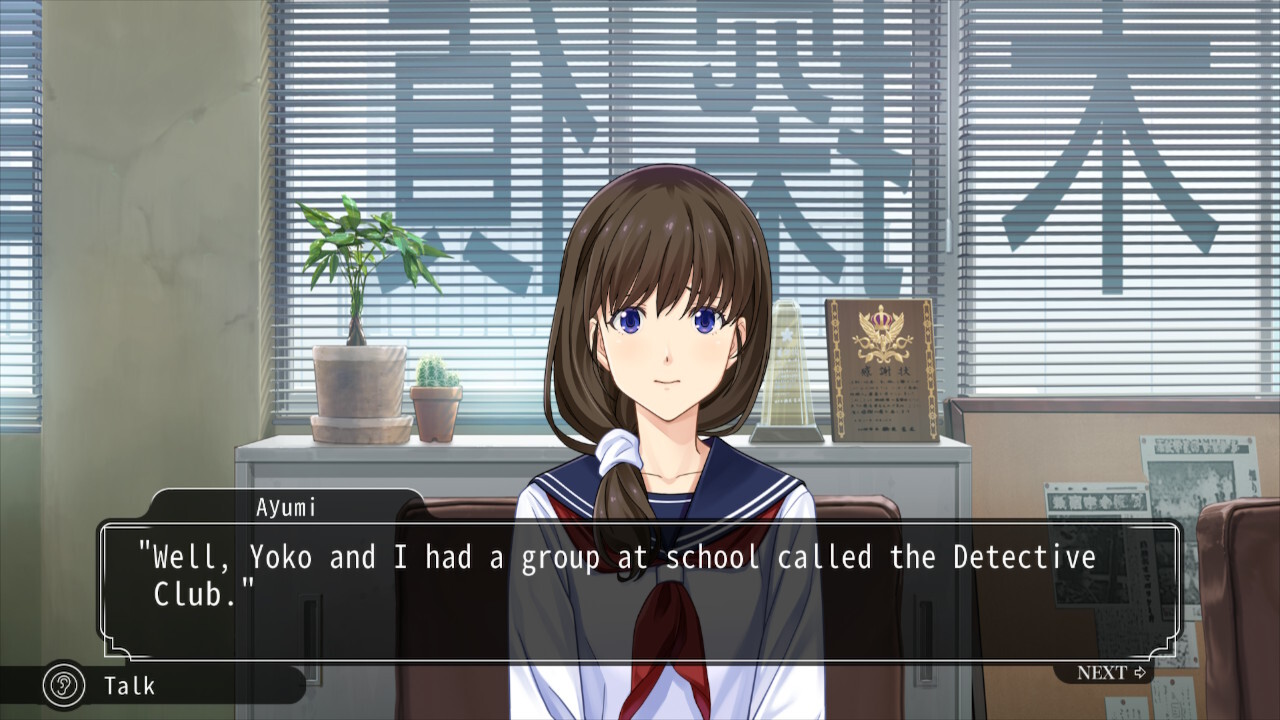 Speaking of, if you’re getting in on both of these adventure games it’s worth considering that The Girl Who Stands Behind was the second game released but a prequel to Missing Heir’s events by a couple of years. Other than meeting recurring character Ayumi Tachibana and learning the circumstances that lead to the protagonist joining a detective agency, it doesn’t link to the other game’s narrative outside a post-plot sequel hook. Which one you play first can comfortably go either way.

Though it may be a classic experience, Famicom Detective Club: The Girl Who Stands Behind’s modern flourishes and strong plot lets it fit perfectly on Switch. Playing handheld is where this genre is strongest, and being able to finally play these obscure corners of Nintendo’s history is a treat. They may not have the flair or variety of other, similar games but my time with this one was more than enjoyable thanks to its straightforward but satisfying story-telling. For a handful of hours and some outdated progression mechanics, you’ll be treated to a one of the prettiest pseudo-supernatural murder mysteries around.

The post Review – Famicom Detective Club: The Girl Who Stands Behind appeared first on Nintendo Wire.