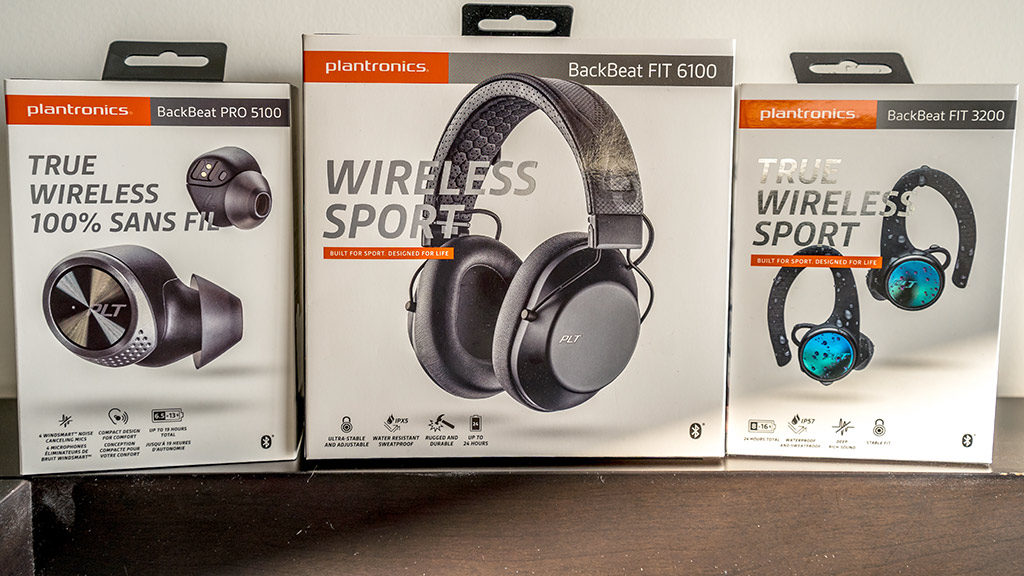 Plantronics has three different types of BackBeat Bluetooth wireless headphones available, each with a unique style, but all focused on being active.

Not all headphones or truly wireless earbuds are designed for dealing with sweaty and wet conditions, and thats what these specialize in. Plantronics has made its name with excellent microphones in the form of office and Bluetooth headsets, though it also makes good headphones for music. 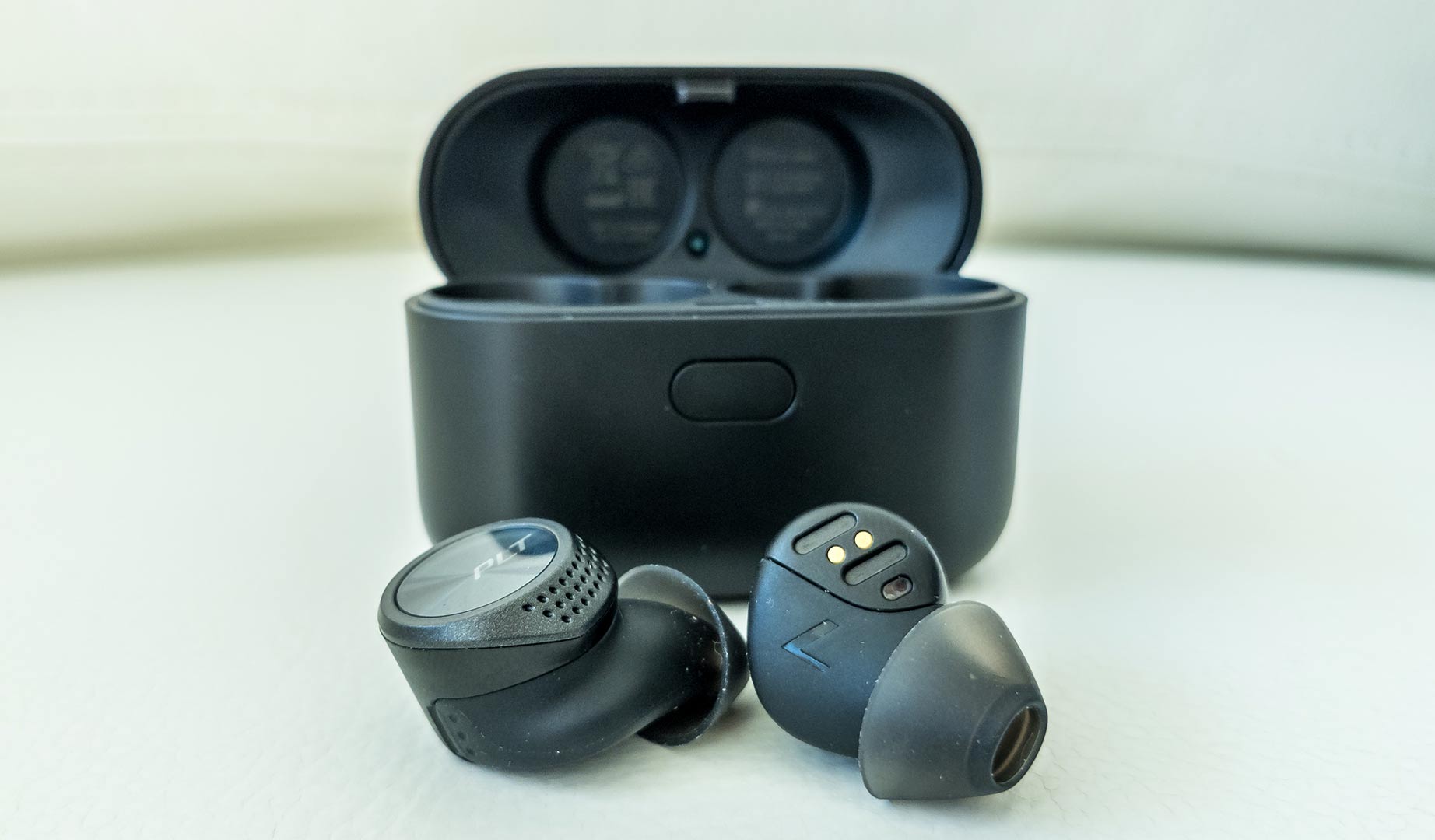 The BackBeat Pro 5100 may appear to be the most compelling of the three because theyre the smallestand are Apple AirPods alternatives. They use a slightly unique design that combines the earbud with the portion that clips into the earpiece itself. There are three sizes from small to large, offering a good range for any pair of ears.

Theyre also lightweight with some ruggedness involved. Plantronics managed to get an IPX4 rating, meaning it has sweat resistance and will be okay if caught in some rain. You cant, however, dunk these into water, so no swimming with them.

I found them comfortable to wear, yet initially struggled to find a good seal. I wore the large-sized earbuds and found I had to raise the volume often to bring in more of the music. Plantronics didnt seem to go for good noise isolation here, preferring to allow some ambient noise in. I get itrunners dont want to lose audible contact with the outside world, but the higher the volume, the more it affects battery life. Plantronics rates it at 6.5 hours, but between four and five is what I usually got because of the volume.

And while they do sound good, you get the most out of them once you find the perfect fit. Bass doesnt come off especially thick, whereas highs and mids are more detailed, making these earbuds good options for music that sounds better in that part of the spectrum.

The onboard microphones are excellent, which hardly surprised me. Plantronics knows good mics, and it put four of them to cancel noise out for calls. People I spoke to had no idea I was using wireless earbuds. 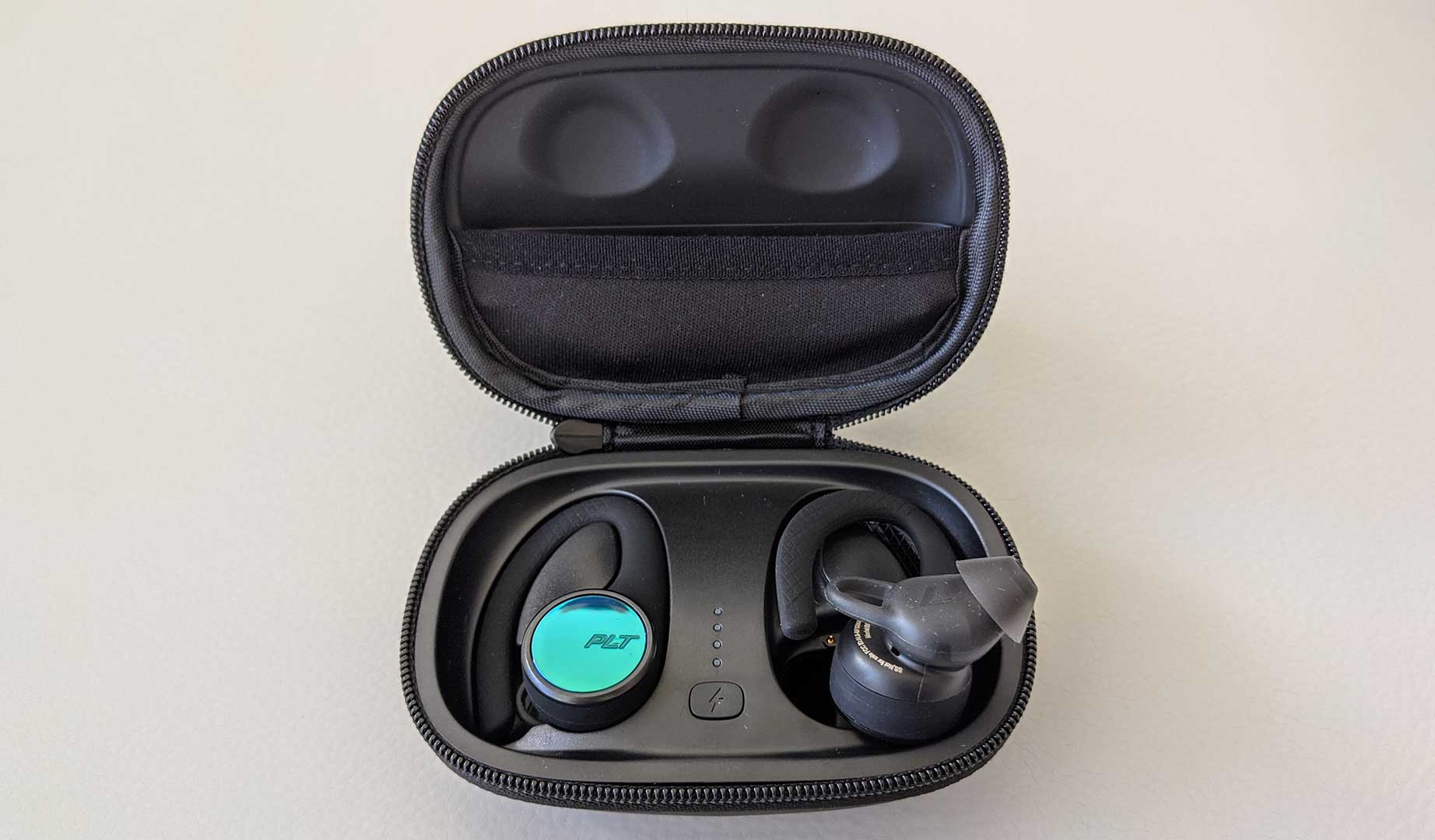 Unlike the BackBeat Pro 5100, the 3200 is from a familiar design. It follows the BackBeat Fit 3100 entirely, right down to a very similar form factor. Except for one key thing, which is better bass this time around.

These earbuds are more fixed and focused, meaning the fit isnt as adjustable, and the build is made for active situations. There are three different tips, two of which have fins, and one with a smaller wing, but the hooks remain intact. This pair has an IP57 rating, so it can withstand submersion down to a metre of water. It makes it much easier to rinse and dry them after a particularly sweaty workout. 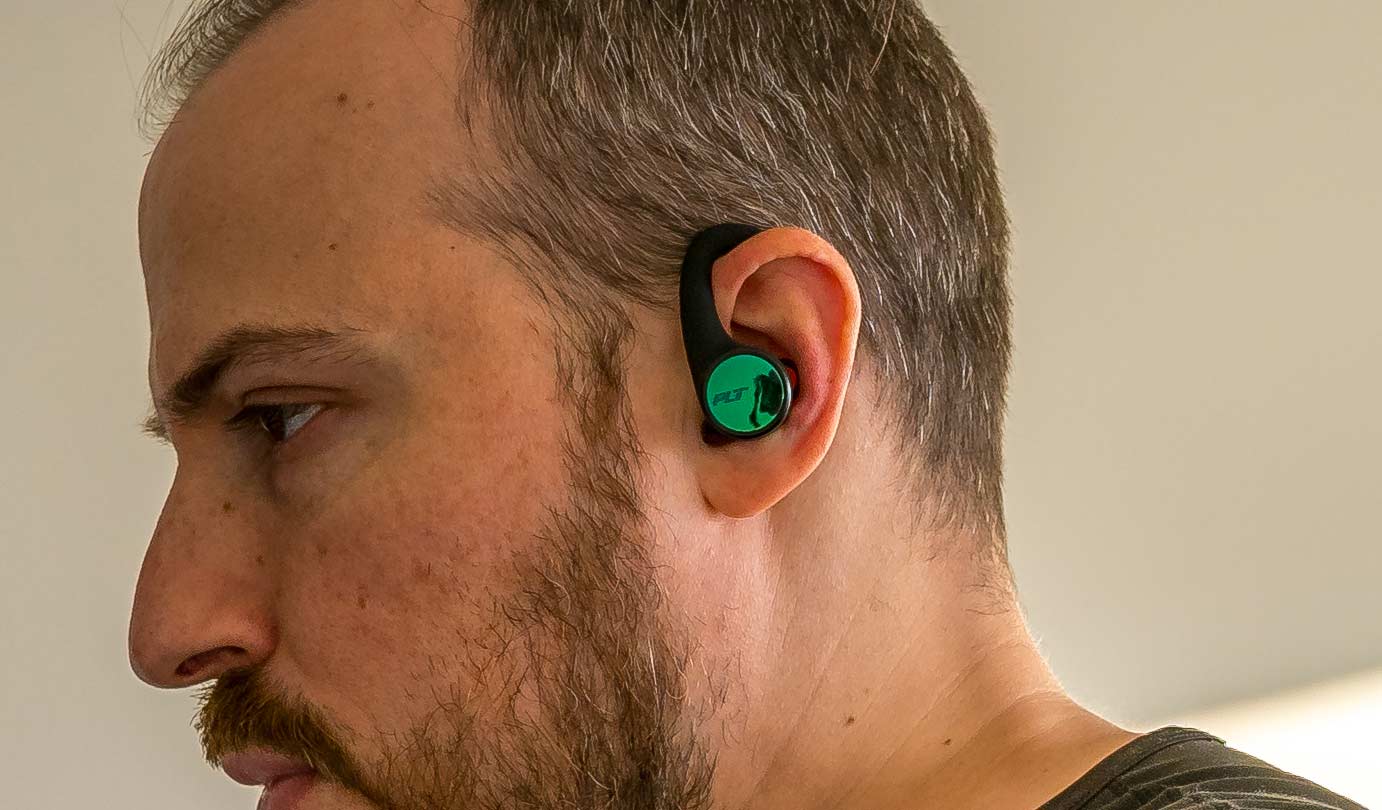 The hooks keep the earbuds in place, which is key when doing a run or heavy workout. Plantronics had to figure out how to improve audio quality and the biggest change was adding larger tips to create a better seal. Theres no question bass is heavier here than with its predecessor because of that. That explains why the sound feels deeper here, despite both using the same size drivers. These produce a more balanced sound signature, and while not amazing, at least its a noticeable improvement.

I didnt have to raise volume quite as often as I did with the BackBeat Pro 5100. Plantronics includes an Awareness mode that lets ambient sound seep in to hear your surroundings for increased safety. I found it wasnt always necessary because the fit didnt always fully seal off outside noise.

As with the other models, the onboard microphones performed very well, making calls fairly easy to manage. I did have to raise volume often to hear others if I wasnt in a quieter space though. 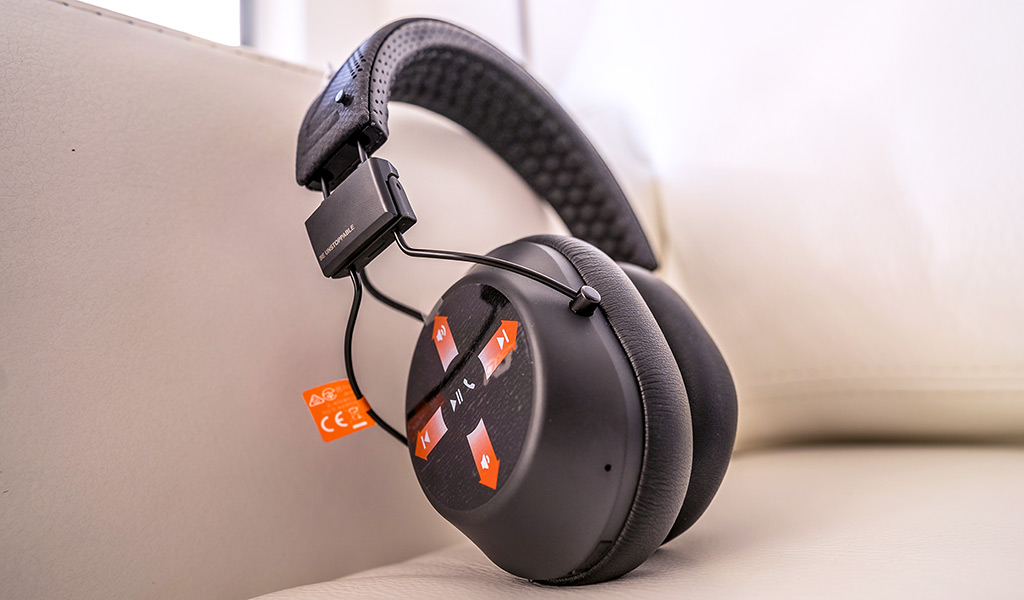 The comfort continues with the BackBeat Fit 6100, the one pair of over-ear headphones in this trio. Plantronics maintains the same sporty focus with these, which explains the lightweight and foldable build. The headband has plenty of give too, so even if they twist around a little, its okay. Interestingly, you can pull out a cord from the right side and latch it on to a hook to tighten the headband even further.

They share much with the other two models, like the Awareness mode, microphones, and BackBeat app support. The onboard controls on the right earcup have touch-based controls for play/pause, volume, track navigation and taking calls. Holding a finger there can also bring up whatever voice assistant youre using on your phone. 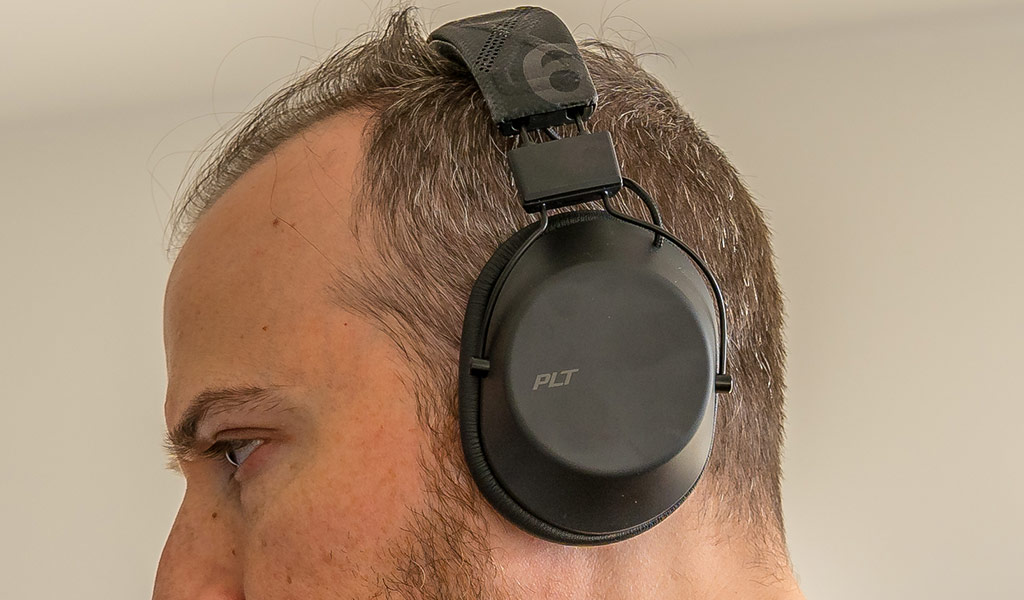 Yet again, Plantronics could have been more generous with the volume on these headphones. And its not my ears because comparable headphones are louder at similar volumes. Being over-ears, they do seal fairly well, so outside noise isnt the issue. Nor is the sound signature, for the most part. They arent especially bass-heavy by default, but you can change that in the app.

These are designed for the gym, and thats where the IPX5 rating steps in for sweat and water-resistance. I should also note that battery life is rated at 24 hours per charge. Even at higher volumes, I was hitting 20 hours easily, which is a great number for any pair of headphones.

Between the comfort and sound quality, the BackBeat Fit 6100 are good in any scenario, not just the gym. But if youre looking for deeper bass or variance through an equalizer (EQ), you may want to think it over.

Plantronics has an app for iOS and Android called BackBeat that helps facilitate all three models in a few ways. For one, there is a basic EQ, albeit limited to three choicesBalanced, Bass Boost and Bright. Balanced is the default, whereas Bass Boost delivers more bass, and Bright pushes more treble.

The app does more than that once you dig in. The full instruction manual is inside, plus options for several functions. You can toggle HD Voice on (if your carrier supports it) for calls, turn touch controls on or off, and assign actions to the tap functions on the right earcup. This is also where you wirelessly push firmware updates to the headphones directly.

A manual EQ wouldve been nice, if only because it could bring out more out of each pair. I would have also liked some extra controls for the onboard tap controls, but thats a minor concern.

I do take issue with Plantronics using microUSB on all three models for charging the cases. USB-C has fast become an industry standard, and it wouldve been nice to charge the case with the same cable one uses for their Android phone. Again, it may not be a big deal for you, but its something to consider.

Ultimately, this was a better effort from Plantronics, though I dont really understand the volume levels. These should be louder by default. You may find them adequate, as I know my experience is subjective.

They have the comfort side of the equation down. I never felt any discomfort or irritation when wearing all three pairs, in or outside the gym. Battery life holds up well, though volume does factor into that. The steadier it is, the more hours you squeeze out of them. I would recommend these if youre active and want peace of mind that they wont falter breaking a sweat. If youre just looking to lounge with a pair of headphones there are others you can try.

Check out the latest from Plantronics, plus all the other headphones available.