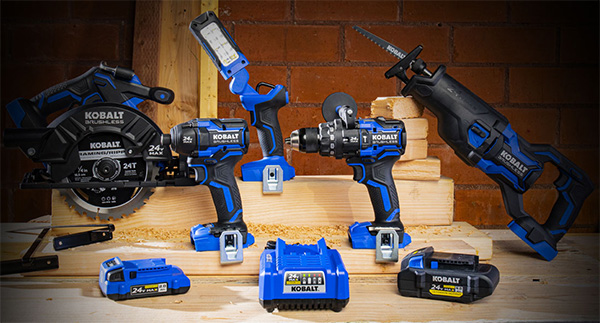 Lowe’s has come out with a new line of Kobalt 24V Max XTR cordless power tools, and partnered with ToolGuyd to help spread the word.

There was supposed to be a special media event to launch the new tools, but the COVID-19 pandemic threw a wrench in the plans.

I’ll be putting these tools through their paces on a sponsored project (thank you Lowe’s and Kobalt!), and aim to answer any questions you might have.

First, let’s talk about the most important question you might have. Why should you care?

Here is the Kobalt XTR cordless power tool line summed in a couple of nice and neat bullet points:

That’s a little vague, let’s try that again. Following are the highlights that Lowe’s used to introduce me to the new Kobalt 24V Max XTR system:

I’m embarrassed to say that I read Lowe’s bullet points several times, but only now do I see that the drill has anti-kickback tech. Many, even most, pro-grade premium brushless drills don’t offer this yet even, let alone brands that include DIYers in their target audience. I’m definitely going to have to put this to the test.

Well, let me tell you about my experiences so far, and my initial impressions.

Shown here is the Kobalt XTR brushless drill/driver that Lowe’s sent over for use, review, and vetting.

Whoops – I had intended to snap a quick photo of the drill with Kobalt’s 2Ah battery connected. I was just having an easy time drilling some holes in bamboo and forgot that I grabbed the compact 4Ah battery first.

But I suppose that works, since this is the separate drill/driver and that’s the battery it is kitted with.

I left the auxiliary handle connected, but as with other drills you can probably remove it for lighter drilling and driving tasks.

For heavy-duty tasks, the aux handle helps with control and stability, and with this drill delivering up to 1,200 in-lbs of torque, you might need it. But, also keep in mind that this drill features built-in anti-kickback technology. (If I say this too many times, it’s because I’m still surprised such a feature is present in this new XTR drill and the hammer drill.

This drill is a great size, given that it’s one of the most powerful cordless drills I have ever used. Its grip is comfortable, the LED worklight is in a convenient spot, and the clutch and chuck are as near effortless as can be.

In terms of power and performance, I have a lot of work to do before I can set up a torture test of sorts. But in the meantime, I’m enjoying the use of this drill. So far, it’s speedy.

I haven’t had any project-related use for the new Kobalt XTR brushless reciprocating saw yet, and so I turned my attention towards pruning a couple of branches. This is something I’ve regularly been using cordless reciprocating saws for, and it’ll give me a quick and immediate sense of the saw’s performance.

Here’s where I have a problem, but not with the tool. As mentioned at the very start of the post, we’re exploring the new Kobalt XTR series as part of a paid partnership with Lowe’s. When a sponsored project or advertising is involved, I try to watch my words carefully, to ensure I’m honest and candid, but not overly enthusiastic.

To be frank, I probably wouldn’t have paid such prompt attention to this new brushless reciprocating saw if not for the partnership. How good can a cordless recip saw aimed at DIYers and value-minded pros really be?

It’s powerful, and it’s fast. The shoe can be adjusted to an extended position, the blade holder is tool-free and easy to use, there’s an LED worklight, and it features anti-vibration tech to reduce user fatigue. The orbital action can be turned on or off by a quick turn of a dial.

It could be more compact, but in this form factor I generally like as much power, performance, and features as I can get, and the Kobalt XTR delivers. I don’t have to consider it a review sample and give it away or donate it after all this, do I?

I would say that this recip saw is more powerful than any consumer-focused model I’ve ever used, and that would be true, but I think that would be a disservice to its pro-like cutting speed.

While not the most compact impact driver I’ve ever used, the new XTR is certainly the most powerful, delivering up to 2400 in-lbs of max torque.

The highlight here, aside from the 3-speed mode selection, is the special “ASSIST” mode that is said to help prevent cross-threading and cam-out. It basically starts things off really slow so that you can start smaller or more difficult fasteners with greater control.

But wait – at this point, I’m wondering – what’s the catch?

The new Kobalt XTR circular saw isn’t a slouch either. 2x4s weren’t a challenge, and I’m going to have to step up my testing to see how it compares to pro-grade cordless saws.

In future reviews or comparisons beyond this campaign, I don’t think I’ll even bother comparing it to typical DIYer brands’ saws – it’ll easily blow them out of the water.

Ah – I finally have something negative to say about these tools! Sorry, I’ve got nothing – I really thought that something would come to mind.

Oh, I know – I really wish that Kobalt (or any other brand) could develop a tool-free blade change mechanism. Initial blade installation can sometimes take me a moment, to hold down the spindle lock as I loosen up the retention screw. It’ll be easier to change the blade after this, since the blade thickness gives the included hex key (it’s stored on-board) extra clearance.

I’m really going to enjoy exploring these tools further, something I might not have been able to budget the time for if not for this partnership campaign with Lowe’s. 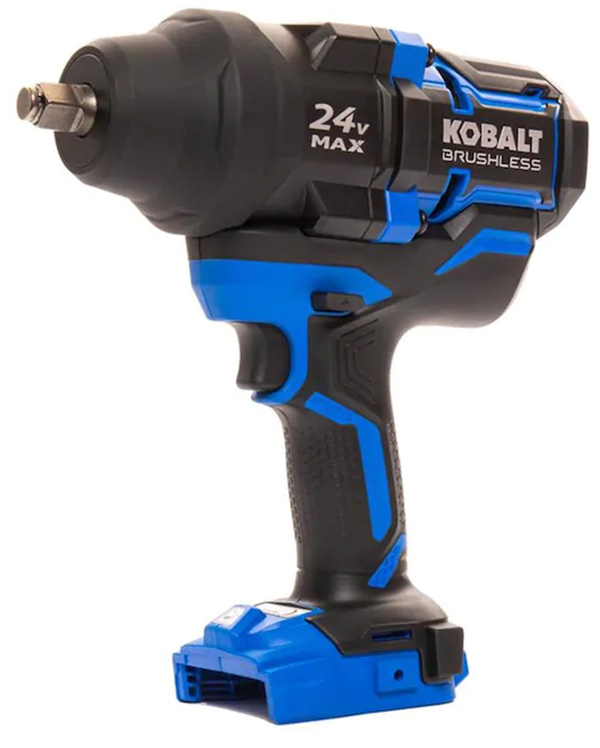 This couldn’t have come at a better time.

Last year, a neighbor had trouble loosening the blades on his lawn mower. He asked for a torque wrench, and getting a sense for what he wanted, I brought out a breaker bar. Boy, those nuts were on tight. I gave up after some grunting and retrieved a heavy duty cordless 1/2″ wrench, and it did the trick.

Do you know how much a pro-grade heavy duty impact wrench costs? A leading brand comes in at $349 for their one-kit battery. The Kobalt XTR kit, with charger and compact 4Ah battery, is nearly as powerful and priced at $269, plus there’s a free extra battery promo going on right now.

This fills in the gap between more affordable lighter duty tools and much pricier heavy duty tools, all without any obvious sacrifices or major compromises.

Why Should You Care?

These tools are so much more than I expected.

Kobalt’s 24V Max brushless cordless power tools are all pretty decent performers, and I expected these new XTR tools to be a small evolution, but the features (most notably the anti-kickback tech), power, and performance caught me by surprise.

Now, I knew that “more power” and “better performance” and “more features” were key benefits, but it surprised me how these on-paper claims translated to reality.

Looking at pricing, the new Kobalt 24V Max XTR brushless drill/driver kit is $169, compared to $159 for the non-XTR model. For the $10 bump-up in price, you get a compact 4Ah battery over a regular 2Ah pack, nearly double the max torque, anti-kickback tech, and all that without any perceivable tradeoffs. They tweaked everything! 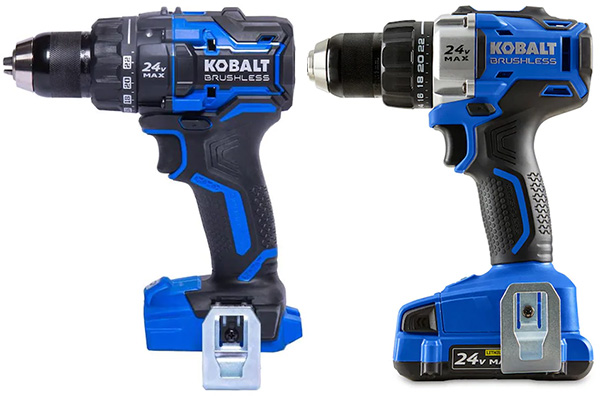 I almost don’t want to say it, but the new tools even look better too. This just shows me that every part of its development was carefully thought out.

So why should you care? These are Kobalt’s best cordless power tools – ever, and they’re packing some serious power.

What Isn’t So Great About Kobalt’s XTR Cordless Power Tools?

I’ve edited and re-edited this post to tone down my enthusiasm, but it’s not an easy task.

I had some hesitation that XTR was going to be mostly about the new compact 4Ah battery, and that all the other benefits stemmed from that. I was wrong, and glad to acknowledge that.

To offset my overall positive and enthusiastic tone, let’s talk about the one downside – more power, more performance, and more features don’t come cheap. The LED worklights are usable, the tools come with belt clips, and feature-wise, the tools are essentially fully-loaded. As such, these tools are not going to be for everyone.

Kobalt XTR brushless tools look to be aimed at users who are ready to progress past entry-level or even mid-level cordless power tools that deliver lower power, fewer features, and less compromises.

Go back a few years, and there wouldn’t have been any competition between these XTR tools and the then-new pro-grade offerings that were leading cordless power tool innovations. While pricing has come down on brushless motor tech, there’s a limit as to how affordable such tools will be.

What do you want to know? I’ll be spending a lot of time with these tools this month, so ask away, and I’ll answer what I can.

If you were to receive any of these new Kobalt XTR cordless power tools for free, such as part of a giveaway, or as Lowe’s gift card landed in your hand, which one would you choose?

If a combo kit weren’t an option, and ignoring for a moment that I already have all these tools in-hand, I’d go with the reciprocating saw, and the drill/driver as my second choice. The reciprocating saw seems like it can handle anything I’d ask for from a cordless saw, and it can do it fast and comfortably.

Thank you to Lowe’s for providing the review samples, and for giving us the opportunity to explore these tools as part of a sponsored campaign.