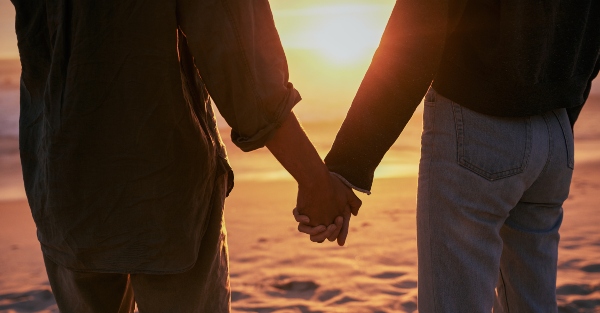 For me, while in the latter category, it would have been disingenuous to suggest my history didn’t affect my potential future romances.

The term “hooked on your ex” is appropriate. A fish can live with a hook in its mouth and mostly ignore it, but when it makes a sudden move or brushes up against a rock or another fish, it stings a little.

An interrupted explosion or a thud

I will always love all three of my exes because I spent a total of 24 years with them. I have strong memories of each one.

When you separate, sometimes it’s the slow end of a long, gradual, growing apart and a friendly relationship endures. Or it ends abruptly, before having time to completely ripen.

Whether sexual attraction remains is an important variable. If you still physically desire your ex, there’s a romantic pull beyond the breakup. If it feels more like two friends looking through a photo album, then it’s more comfortable and less intense. And less likely to negatively affect future romances.

Mine all started the same

Nothing ever erases the memories of the early stages of a relationship with the wonder and awe and virility — and adrenaline-soaked connectedness.

Our brains are a little like those thousand-year-old trees, we don’t know what causes those deep rings to form, but once they do, they never go away — a permanent memory.

For some, love comes easy. Maybe they’re physically attractive, or funny, or have a dynamic personality and find love is readily reciprocated. I imagine if you’ve had a hundred “true loves” there is some diminishment in meaning. But if like me, reciprocated love is as rare as a total eclipse or as frequent as a new ABBA album when it does occur, it leaves a deep ring.

I contend an explosion of love, mutually explored, and expressed, transforms us, permanently. It’s true time changes and heals us.

We know trying to rekindle the past is often disastrous, but something deep inside us occasionally flickers with an irrational yet persistent hope. An unquenchable “What if…”

We’re all built a little differently.

The most difficult part of breaking up for many is the sense of betrayal. “But you promised me you would love me forever,” is often followed by, “I know. I’m sorry.”

Many save love letters for decades, knowing that’s all that’s left. An emotion long faded, promises long ago broken.

It’s no wonder many have given up on the notion of a life-long, permanent, unbreakable love. We consciously know that initial burst of excitement can’t last forever, but we hold on tightly. Even if you eat the most decadent piece of chocolate cake with a tiny spoon, you eventually get to the last bite. And then you’re full….or still hungry and want more. Either way, it’s gone.

Being analytical to a fault, I’ve often wondered why one of my exes was much more difficult to get over than the others.

I realized it had to do with a vulnerability, and innocence that can only be seen and felt, not expressed verbally.

I was powerfully in love with all three of my exes, but one transmitted it through her gaze. It wasn’t necessary for her to say a word, her eyes said it all. She looked at me like I held the key to a wonderful life. Her love made me feel powerful, meaningful, and important.

Vulnerability is part of all true love affairs, but when it fades or dissolves, it never comes back — like a grown child who always loves you but doesn’t need you the way they did when they were young.

Yet the desire to see that vulnerability in someone’s eyes is a huge reason why the hook still occasionally stings and the idea of love remains.

Sex tends to be a great equalizer of sorts. Anatomically, studly men and gorgeous women have sex the same way less beautiful people do.

I’ve only had a one-night stand once in my life. It was in college. We knew each from a mutual class and one night things evolved into a wild romance.

The next day, I saw her in the courtyard, and we chatted. After a few minutes, she looked me in the eye and asked, “So, what are we?” I asked her what she meant. She asked, “Are we something?” I must’ve taken too long to answer because she made a kind of huffy, annoying sound like a kid makes when asked to do the dishes, and then walked away.

I still remember the joy and excitement of that one night but never craved anything beyond it.

With my exes, the sex was infused with intensity and meaning beyond the physical.

Unlike a one-night stand, it felt like the beginning of something larger than life. It felt like the rocket fuel needed to create the romantic dream.

And with one ex, in particular, the desire may be bottled and contained, but will likely exist, in some form, forever.

We all know some people can get our chemicals percolating before they even enter the room. Just the thought of being with them excites us. And when they do arrive, we tingle, we vibrate, we feel alive.

It’s likely a brain game of sorts — a combination of chemicals, synapses, aromas, and graphic memories.

We know from a young age some people “turn us on” more than others.

We never know how long it’s going to last.

Sometimes it ebbs and flows, but occasionally, even when factors such as compatibility, common interests, and beliefs are a barrier, a strong attraction remains.

I still feel some chemistry for my exes but harbor no illusion or desire to have another swing of the bat….except for one….who, like anyone who’s ever quit smoking, drinking, or drugs knows, the testing of temptation is dangerous. It’s best to stay away.

But it’s disingenuous to suggest a vulnerability doesn’t remain. It does.

That is why so many people after a breakup look for someone to “rebound,” a sincere attempt to re-capture the chemistry with someone new.

You cannot transplant your past love to someone else. But you can start fresh.

How to move on

Don’t fight it. Tuck it away, manage it, occasionally savor it, but don’t deny it.

Lost love is a death that leaves us with powerful memories, intense pain, and, on occasion, inconsolable remorse.

I stopped long ago trying to erase or eliminate my love for my exes. I’m well past any obsessive-compulsive mental behavior. I harbor no illusion of reconciliation with any of them — nor do they likely think of me in that manner.

I’m still vulnerable with one of them and accept it would be difficult to turn her away if she ever re-approached me. But I would. Because I realize if it was meant to be, it would’ve been. And it wasn’t.

By a certain age, most of us have romantic skeletons in our closets. And it makes sense to occasionally share our pasts with our present love interests. But dwelling on the past is the fastest way to ruin and destroy a new relationship.

Do some people never get over their exes? Unfortunately, the answer is yes.

Can you still harbor love and respect for your exes, compartmentalize it, and focus on creating a new love? Absolutely.

But do not mix the two.

You will never find someone who’s interested in loving you….and the memories of your ex.

Either pack it away, cut the fishing line and let it go, or give up on any future love or relationship.

How will you know when you’re ready to love again? You’ll see it in their eyes. And all the vulnerability, chemistry, and excitement you once felt for someone else, will emerge with this new person.

And when that happens, you have a choice — relive your past or give your heart to someone new. There is no guarantee you won’t get hurt again.

But if you allow your past experience with your exes to cloud your present life, you will destroy any chance at developing a future relationship.

Sure, you can still love your exes, but if you want to ever love again, you must let them go…..forever.

You may also like these posts on The Good Men Project:

The post It’s Okay To Love Your Exes Forever appeared first on The Good Men Project.