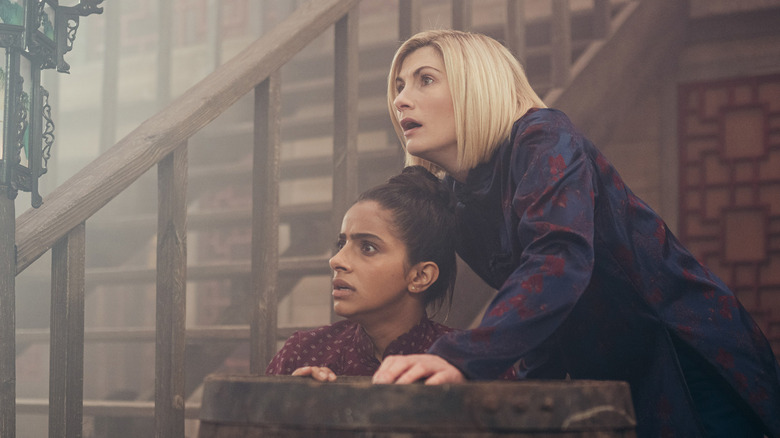 We're coming to the end for the Thirteenth Doctor (Jodie Whittaker), who is already midway through her farewell tour of specials with "Legend of the Sea Devils," this year's Easter special of "Doctor Who" and the last special before this fall's centenary episode, which will see Jodie Whittaker departing the role and a new (still unknown!) actor stepping into the TARDIS. So you would think this spring special would be a chance for "Doctor Who" to pull out the big guns and give Whittaker the bombastic, swashbuckling adventure she deserves before she hands in the keys to the TARDIS. While "Legend of the Sea Devils" sounds like that sort of swashbuckling adventure on paper, it's still in dire need of that much-needed "Doctor Who" swagger.

So much for the new beginnings of Easter: "Legend of the Sea Devils" feels very much like more of the same, apart from the timid hint of a romance between the Doctor and Yaz (Mandip Gill). To call the Chris Chibnall era hit-or-miss feels like an understatement — the whole of Whittaker's run feels like a study in missed potential. And it's a shame. Whittaker has always brought an exuberance to the role that could often make up for the shoddy plotting and frustratingly passive characterization. But for some reason — except for those few moments of quiet longing shared between the Doctor and Yaz — even Whittaker seems like she's going through the motions in "Legend of the Sea Devils."

A Lost Treasure, A Lost Ship 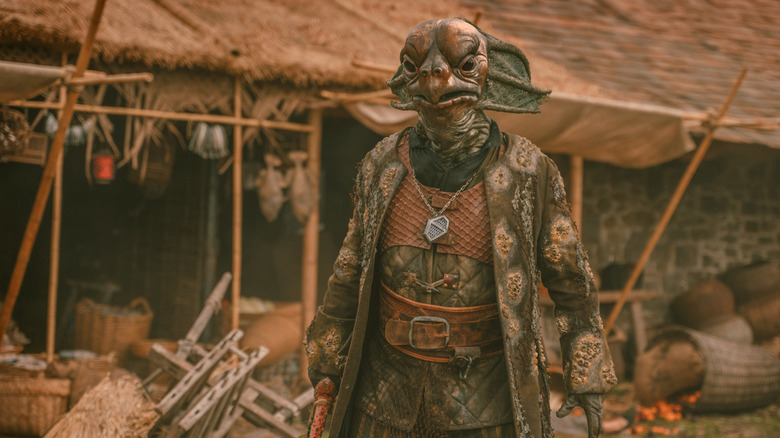 On a rain-drenched day in 1807, residents of a tiny Chinese village flee from Madame Ching (a fierce Crystal Yu), a real-life historical pirate queen, who stalks through the muddy streets looking for ... something. The villagers cower in fear until they realize that Madame Ching is approaching the statue of a monster at the center of the village, which Ying Wai (David K. S. Tse) warns will unleash a great demonic force. But she ignores him, determined to break open the statue, which she believes holds the key to the lost treasure of the Flor de la Mar, last seen on the ship of the legendary sailor Ji-Hun, whose ship disappeared hundreds of years ago. Ying Wai attempts to stop her but is knocked back by the force of something emerging from the statue: a Sea Devil.

Yes, Chibnall, who co-writes this episode with Ella Road, is bringing back another Classic Who monster. But unlike his previous successful revamps of the Daleks, the Cybermen (until that dumb "CyberMasters" twist), the Sontarans, and — during the Moffat era — the Silurians, the Sea Devils is his weakest effort of the bunch. First introduced in 1972, the Sea Devils were actually amphibious Earth reptiles from prehistoric times, who lived in technologically advanced societies long before humans. You know the whole deal — suspended animation, awaken to a new planet full of "land parasites" that they loathe, yadda yadda yadda.

The goofy redesign of the lo-fi, but charmingly B-movie creatures is a little too cutesy, but worse yet, the Sea Devils are kind of boring. Which is a big feat when you consider the fact that they fly a glowing green pirate ship and fight with poison-tipped laser swords. But even the addition of a giant fanged mythical sea monster under their control — which swallows the TARDIS at one point like Monstro in "Pinocchio!" — can't make their nefarious plan more interesting. Which makes Chibnall and Road's decision to draw out the great mystery of the episode feel like the show is spinning its wheels in the worst way.

The Key To The Maguffin 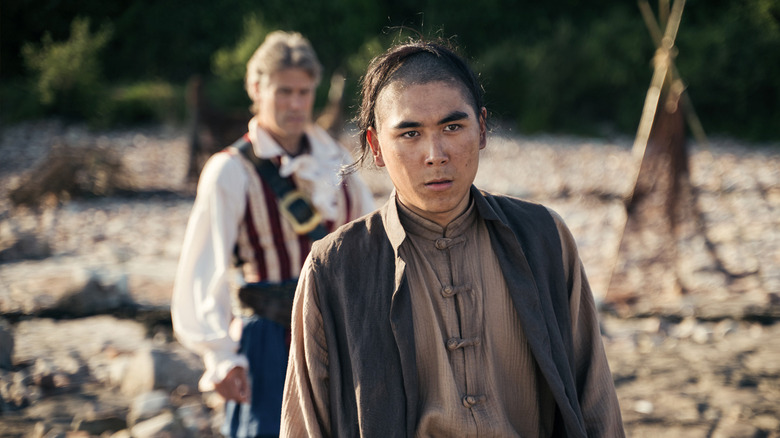 The Doctor (finally wearing a different, era-appropriate outfit!), Yaz (whose whole direction this episode seems to be "yearning"), and Dan (John Bishop, as charmingly silly as ever) arrive in 1807 China, the TARDIS having been drawn off course by some strange force. They realize it's the Sea Devils' technology that has brought them here, but the Doctor's string of technobabble is interrupted by a scream coming from a nearby village.

They rush to the village and find the aftermath of a massacre, which Ying Wai's son Ying Ki (Marlowe Chan-Reeves) accuses Madame Ching of causing. But it's clear to the Doctor immediately that the pirate queen didn't kill the villagers, who have dropped dead of poison. It is the Sea Devil, who is introduced in a strange shallow-focus shot that is representative of some of this era's bizarrely limiting visuals (what's the point of all those fancy cameras if you shoot exclusively in intense close-up!).

After a failed attempt to catch the Sea Devil, the team splits up, with Dan reluctantly wandering off with Ying Ki, who clutches a mysterious gem that was passed down in his family, and the Doctor and Yaz running back to the TARDIS to solve the Sea Devils' plan. And in one fun twist of the episode, they actually use time travel to their advantage, with the Doctor and Yaz traveling back 274 years to find the lost treasure of Flor de la Mar when it was first lost. The Chibnall era has been fairly minimal in its use of time travel within its plots, apart from this year's extremely fun New Year's special — a contrast to the Moffat era which frequently built time travel into its episodes — but it's refreshing to see the show embrace it again, even if it comes so late in Whittaker's run. Unfortunately, this jaunt back in time gives us little more than a semi-interesting sword fight (thanks largely to Arthur Lee's charismatic Ji-Hun, who the Doctor and Yaz see in the midst of throwing his crew overboard) and an exposition dump from the Doctor. They know the location of the wrecked ship, now, the Doctor tells Yaz, and that the Sea Devils are after a mysterious Keystone, our Maguffin of the day. 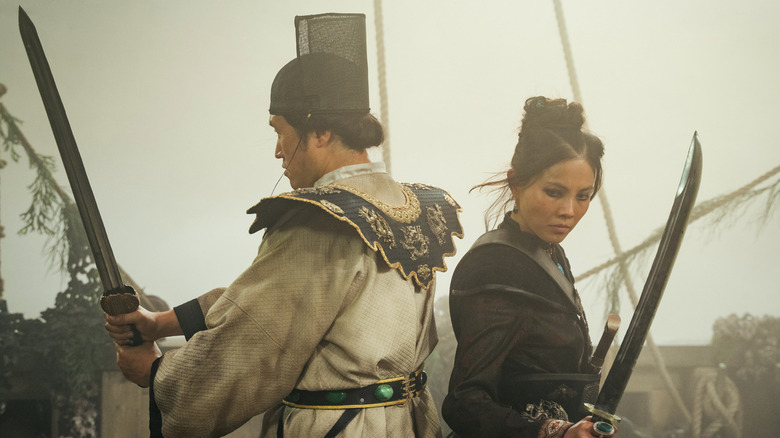 Meanwhile, Dan (who is finding himself in an odd-couple routine with a new guest star every episode) and Ying Ki have found their way on board Madame Ching's ship, which is oddly empty of a crew. Ying Ki has vowed to kill Madame Ching after she killed his father, but she catches the two of them whispering behind some barrels and strings them up before conceding to Dan's reasoning: she needs a crew to find the lost treasure of the Flor de la Mar. Her crew, including her two young sons, had been taken kidnapped and are being held for ransom in exchange for the treasure. Ying Ki's desire for vengeance softens when he sees how torn up Madame Ching is over her sons, and the trio band together to form an unusual crew — whose ship is soon besieged by a mythical sea monster, the Huasen, whose mammoth size and rows of fangs look truly impressive in an episode that looks oddly shoddy, even for "Doctor Who." (The choppily edited sword fight scene is frantic enough to give you a headache.)

It's clear that the crew is focusing their best VFX in select areas of the episode, like the Huasen and like the gorgeous shot of the ocean floor, where the Doctor and Yaz land the TARDIS in an attempt to locate Ji-Hun's shipwreck. The Doctor opens the doors to the TARDIS to gaze outside — protected by an oxygen bubble — at the wonders of the deep ocean, full of colorful aquatic life and shimmering light that is gorgeously rendered in CGI. "Not a bad date, am I?" she teases Yaz, earning an immediate reaction from the woman who had only recently come to terms with her budding feelings for the Doctor. And it's clear that the Doctor is not as oblivious to the feelings as she had previously implied — Thirteen had always been frustratingly opaque, but this brief glimpse of her awkward, unformed feelings is the best she's been! Unfortunately, with only one episode left in Whittaker's run, it's too little too late. And unfortunately, this episode doesn't give the beginnings of this romance nearly the screentime it deserves.

Not one to linger on these awkward feelings for too long, the Doctor interrupts the moment between her and Yaz with a "No ship, Sherlock" joke, which is actually quite literal: Ji-Hun's ship is missing. Just like that, the ocean floor crumbles and Huasen emerges from the abyss, swallowing the TARDIS into its gaping maw. The Doctor and Yaz discover that the Sea Devils control the Huasen, and within the giant sea monster is their hub and Ji-Hun's missing ship, which they have commandeered for their purposes. What are their purposes? To use the Keystone to flood the world and take it back from the humans. Typical sci-fi stuff. It's a very slim plot that is given more weight and mystery than it deserves, with the revelation of Ji-Hun's disappearance — he was captured by the Sea Devils and put in suspended animation — also met with little more than a shrug.

I've complained about this too many times before so I'll keep it short, but I think it all comes down to how frustratingly passive the Thirteenth Doctor is. Rarely a few steps ahead of things like her predecessors, Thirteen reacts more than does anything, and it's in the Doctor's spelling out of the plot (usually via exposition dumps, which seem even more laborious than usual this episode) on which the episode mystery hinges. And that's no way to play out a mystery, especially when it's one as thin as this.

A Different Kind Of Ship 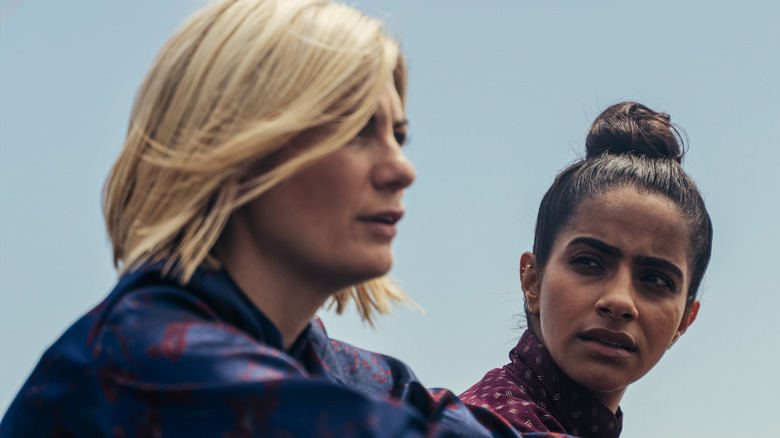 But "Legend of the Sea Devils" has something to offer beyond a few choppy sword fights and some cool sea monsters. The one glimmer of hope is the Doctor and Yaz of it all. Their banter is top-notch, the duo feeling like two peas of a pod more than ever — even if most of their dialogue is exposition. And those rare glimpses of vulnerability in an emotionally distanced Doctor like Thirteen is so, so refreshing.

"If I could have a date with anyone, it would be with you," the Doctor rambles to Yaz in the midst of her latest bit of gizmo-trickery that will stop the Sea Devils' plan and trap them at the bottom of the ocean floor once again. Yes, poor Ji-Hun sacrifices himself to trap the Sea Devils with a little more than a breezy, "You really are a legend" from the Doctor, and barely an acknowledgment from anyone else, but at least we got these brief moments between the Doctor and Yaz. It sounds like I'm being sarcastic, but I've honestly given up on any kind of rich characterization of side characters in the Chibnall era that I've gravitated towards the crumbs of long-awaited development among our core crew.

Dan, who is an admittedly one-note but refreshing addition to Team TARDIS, finally gets his resolution with his love interest Di (Nadia Albina) via a sweet phone call, but it's the final conversation between the Doctor and Yaz that brings the episode home. Or does it? After the promises of something more, the Doctor once again reins things back by confessing to Yaz the reasons she's been distant and why she cannot return her feelings. "I can't fix myself to anyone," the Doctor admits, "But if I do fix myself to somebody, I know sooner or later it'll hurt."

Props to Mandip Gill for her melancholic reaction here and throughout this episode, and how much her bittersweet disappointment shines through as the Doctor makes one final wish while skipping rocks on the beach she had long promised Yaz: "I wish this would go on forever." Which we all know means it will all end too soon.

Tidbits In Time And Space 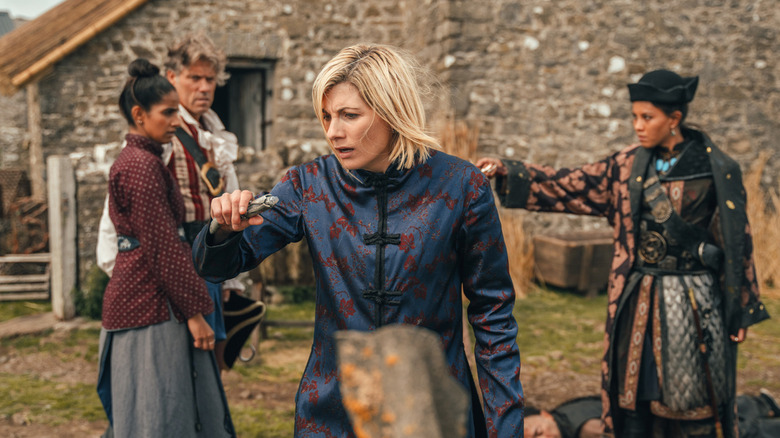 Read this next: The 14 Best Sci-Fi Shows On Amazon Prime

The post Doctor Who Navigates Rocky Seas and Rockier Relationships in 'Legend of the Sea Devils' appeared first on /Film.